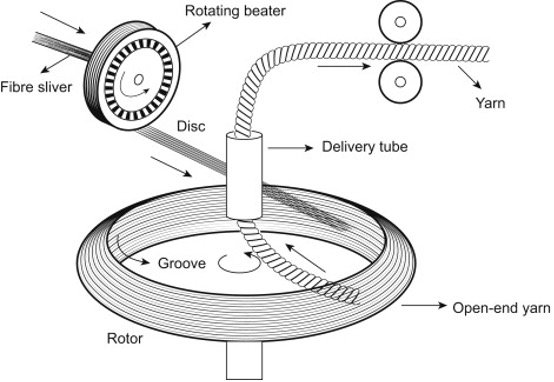 In this comprehensive article, REACT partner CETI offers us a detailed primer on open-end spinning technologies:

What are Open-end technologies?

The principle of rotor spinning is similar to the production of cotton candy/candy floss. Cotton candy is produced by melting sugar in a drum rotating at high speed. Centrifugal force pulls the molten sugar out of the drum, allowing it to solidify and form fibres. The fibres spin around a stick to create the cotton candy.

The Figure below shows the basic elements of open-end rotor spinning. A sliver of fibres is fed into the spinner by a stream of air. The fibres then come into contact with a rotating pin-covered beater, which creates a thin stream of fibres. These fibres are then deposited in the v-shaped groove on the outside edge of the rotor. The rotor spins rapidly, imparting twist to the fibres. Fibres fed to the rotor are incorporated into the rapidly rotating ‘open-end’ of a previously formed yarn that extends out of the delivery tube. The yarn is withdrawn through a doffing tube (also known as a ‘nave’). 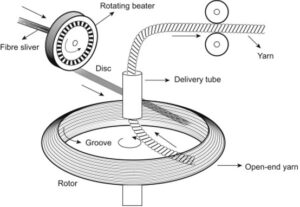 Great advances have been made in the automation of stages of the rotor-spinning process (e.g. rotor cleaning and doffing). Other advances include the development of online quality monitoring using optical or capacitance systems, so that characteristics such as linear density can be assessed continuously, and faults (e.g. the presence of foreign fibres) can be identified and removed automatically.

Rotor-spinning technology consists in the automation of the aforementioned process. This system is faster and much less labour-intensive than ring spinning with rotor speeds up to 140,000 rpm. The Rotor design is the key of the process: each type of fiber requires a different rotor design for optimal product quality and processing speed. 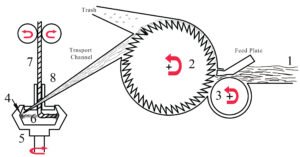 The schematic above explains the process of producing the OE yarns. The sliver (1) is fed to an opening roller (2), covered with teeth by a feed roller (3). The opening roller will separate the individual fibers from the sliver (1).  Then the fibers will be transformed by mean of air to a special groove (4) in the rotor (5) and they will accumulate to form a ribbon of fibers (6). The fibers are led by the groove inside the rotor by centrifugal force, then they are being peeled off to join the already formed yarn (7).  The rotation of the rotor provides the vacuum that transfers the fibres and the centrifugal force that forces the fibers to form the ribbons (6) and pull the yarn end (7) into contact with the ribbon (6). The yarn produced is rotated around its axis and withdrawn through doffing tube (8).  For every rotation, one twist is inserted in the yarn.

What is the difference between Open-end and ring spinning?

The production rate of conventional methods of yarn spinning is a challenge for technologists. Ring spinning is limited by factors such as the speed of the traveller, yarn tension between the front drafting roller nips and the yarn package, and the energy required to rotate the yarn package to enable twist insertion. The low productivity and high production cost of ring spinning have forced machine manufacturers and technologists to look for other methods of yarn manufacturing. A complete solution to the problem is offered by a simple concept upon which all break spinning devices are based. By introducing a break into the material between the supply package and the yarn package it is possible to introduce twist by only rotating the yarn end at the break. This process enables very high twisting speeds to be achieved without increasing power consumption. In addition, the spinning operation no longer imposes limitations on the type and size of yarn package which may be formed. Spinning speeds can be dramatically increased. Since the 1960s new spinning technologies have been developed, including open-end/rotor spinning, friction spinning, air-jet spinning, hollow spindle and Siro spinning. The self-twist spinning method is another of these newer technologies designed to improve productivity in spinning. All these new techniques have their strengths and weaknesses, depending on the type of fibre used and the resulting yarn structure required.

Open-end/rotor spinning has its advantages with regard to production rate, use of floor space, and labour). However, it is not suitable for worsted processing. Open-end/rotor-spun yarn has less parallel fibre arrangement in the yarn structure and completely irregular twist in terms of twist per unit length and twist angle as well as twist direction, due to the distinctive wrapper fibres around the yarn core as shown in figure below.